The International Vaccine Institute (IVI) is a nonprofit international organization established in 1997 as an initiative of the United Nations Development Programme (UNDP).

Our mission is to discover, develop and deliver safe, effective and affordable vaccines for global public health.

What does IVI do?

With an innovative development model and public-private partnerships, IVI focuses on vaccines that are critically needed in resource-limited settings but often overlooked by major commercial developers.

Learn more about our approach here.

Who works at IVI?

Where does IVI work?

IVI is based in Seoul, Republic of Korea with active field programs in 24 countries across Asia, Africa, and Latin America.

Explore the map of our programs here.

Who are IVI’s stakeholders?

How is IVI’s work funded?

Four governments provide core funding for IVI: The Republic of Korea, Sweden, India, and Finland. Much of IVI’s work comes from research grants written by scientists at IVI and their collaborators. These grants come from the Bill & Melinda Gates Foundation, the Wellcome Trust, CEPI, the Samsung Life Public Welfare Foundation, and the Korea Support Committee for IVI, as well as academic institutions, industry partners, and individuals.

Does IVI fund research and development?

IVI does not directly fund grants for research and development to other organizations or individuals. However, IVI often awards subcontracts to external collaborators for select projects.

What are IVI’s core capabilities?

How is IVI different from other international organizations and agencies?

IVI is uniquely present at every step of the vaccine value chain. From public health research at field sites around the world to preclinical discovery and development in the lab, clinical trials and efficacy studies, technology transfers and registration with manufacturers, and vaccination campaigns in outbreak settings, IVI is there to make vaccines more available and accessible to the world’s most vulnerable people.

Why does IVI have member states?

More information on IVI’s member states may be found here.

IVI is prohibited from manufacturing vaccines. Instead, we discover new vaccines, improve existing ones, and transfer vaccine technology to manufacturers for vaccine production.

An oral cholera vaccine and typhoid conjugate vaccine were developed in-house at IVI laboratories, and IVI is currently investing in preclinical development of two vaccine candidates for non-typhoidal Salmonella and Shigella.

What are IVI’s priority diseases?

How does a vaccine work?

Vaccines train the body’s immune system to recognize and fight pathogens like viruses and bacteria.

When you receive a vaccine, you introduce your body to a piece of the germ or a version of a germ that won’t harm you but will trigger an immune (or defensive) response. So, if you come across the “real thing” in the future, your body will quickly remember how to protect against the potentially dangerous germ. This is called immunological memory.

Why is vaccination important?

Vaccines save lives. Immunization saves 2.5 million people every year and millions more from illness and disability according to the WHO. Vaccines have eliminated or eradicated dangerous infectious diseases from significant regions of the global map, protect against cancer, reduce the spread of antimicrobial resistance, and help mitigate the health ramifications of climate change.

Beyond health benefits, vaccination enables children to perform better in school and adults to continue working without the burden of preventable disease, reduces poverty, and increases equality and access to opportunities.

Learn more about the full value of vaccines here.

What is in a vaccine?

Vaccines have two major types of ingredients: antigens, which create an immune or “defensive” response in your body by producing protective antibodies, and adjuvants, which help boost that immune response. Other ingredients may be preservatives and residual antibiotics to prevent contamination, and stabilizers to keep vaccines potent after manufacturing.

How are vaccines made and tested?

The new vaccine then enters pre-clinical research which includes testing in animals to see if the right kind of immune responses are generated. Then, testing in humans proceeds in three phases:

Phase I primarily tests for safety while also looking for the antibody responses. This earliest stage of testing in humans recruits a small number of healthy adults.

Phase II is larger and focuses on those amount of antibody responses. These trials often run for 1 year or longer with hundreds of volunteers, followed by safety analysis.

Phase III proves that a vaccine is safe and protects against disease. This final stage of clinical testing often involves thousands of people with a portion receiving a placebo.

Following clinical development, results are submitted for extensive review and ultimately approval by regulatory authority (e.g., MFDS in Korea), followed by WHO prequalification.

Why does it take so long to develop a vaccine?

On a traditional timeline, it takes on average 5-10 years to take a vaccine from the laboratory to a vaccination program. Every stage from discovery through regulatory review can take at least two years, sometimes up to five. Once a vaccine proves to be safe and effective, building the manufacturing capacity to make enough vaccine also takes time.

Can viruses and bacteria develop resistance to vaccines?

Unlike antibiotics, viruses and bacteria very infrequently become resistant to established vaccines. In the case of influenza (the flu), vaccine strains appear to change yearly through mutation or with new strains around the world and vaccine has to be adapted to the circulating strains every year.

However, most other vaccines do not experience major problems with resistance. The graphic below shows the time to detection of resistance to antimicrobials (in red) and to vaccines (in green). Source: Front. Immunol.

Vaccines are a sustainable solution to disease prevention and are sometimes used for large outbreaks of multidrug resistant bacteria, like Salmonella Typhi.

About IVI and COVID-19

Is IVI working on a COVID-19 vaccine?

How are COVID-19 vaccines being developed so quickly?

The graph below shows a more traditional 5-year vaccine development timeline at the top, and the accelerated 18-month timeline that may yield a safe and effective vaccine at unprecedented speed. 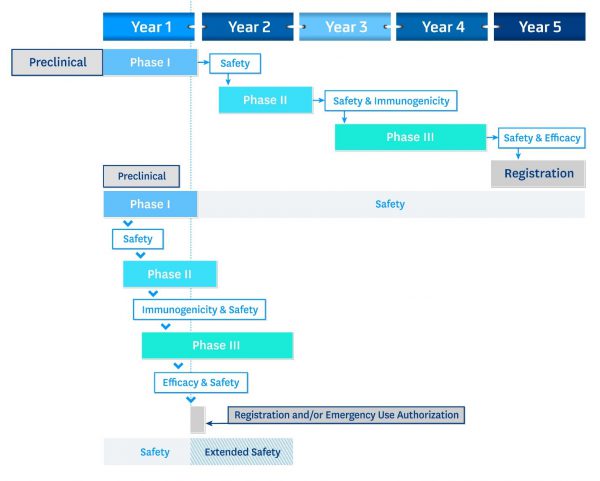 Accelerating vaccine development at the efficiency we have witnessed to date has been a globally collaborative effort of the kind required to end the pandemic.