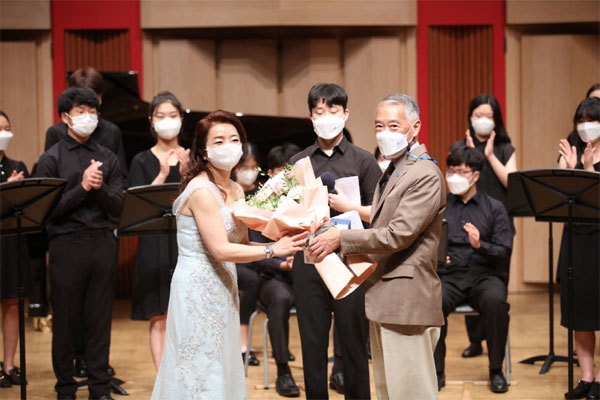 The article originally appeared in the Maeil Business Newspaper in Korean. The below is a translation.

All music is beautiful in its own way, but…Violinist Sang Hee Lee’s music shines a special light

Violinist Sang Hee Lee has performed in concerts for charity for the past 18 years – most recently, she made a 240 million Korean won donation to the International Vaccine Institute (IVI) to support the cause for developing vaccines for use in developing countries. The money came from proceeds from charity concerts put together by Ms. Lee and her students, ranging from elementary school students to a 90-year-old senior.

During her childhood, Ms. Lee’s father owned a sewing factory. Every Christmas, her father would drive to the orphanage with a truck full of stuffed animal dolls.

“Do not be arrogant, and always respect those in need,” her father used to say. As Ms. Lee took her father’s teachings to heart while growing up to become a violinist, she decided to devote her life to helping others in need with her musical gift. She has been organizing her own charity concerts every year for the past 18 years. The Maeil Business Newspaper was able to have a phone interview with Ms. Lee after her concert earlier this month (August).

“I was not hoping to raise big money. I just wanted to do continuously for a long period of time. I did not realize it has already been so long,” she said.

The idea of hosting benefit concerts first came to her mind in the 1990s, when Ms. Lee was studying music in Paris. There, she performed at a charity event for “Korean Roots”, an organization of Korean adoptees living in Paris.

“When I played an original rendition of ‘Achim Iseul (translated as Morning Dew)’ as an encore, everyone at the event sang along to the lyrics and ended up in tears.” Keeping that feeling to heart, she graduated from the Conservatoire National Supérieur de Musique et de Danse de Paris (CNSMDP) at the top of her class and returned to Korea, where she started planning to host charity concerts.

Ms. Lee’s students always make appearances at her charity concerts. Most of her students are college students attending Chung-Ang University or Sangmyung University. Other students, ranging from the youngest in elementary school to the oldest in his 90s, also performed by her side at these events. Since Ms. Lee has been organizing concerts for such a long time, many of her students, who she first met as little children, come back to donate their first salary or volunteer as backstage staff.

“Mr. Jin-Ho Song, CEO of Songwoo Trading Company, is 90 years old, and he is my oldest student. Jin-Kyung Ahn, a student at Sunhwa Arts High School, recently donated her prize money from a music competition. More than 100 students perform with me on stage, and every one of them believes in joining the cause for charity,” says Ms. Lee.

Most of her donations go to IVI. IVI is an international organization with a mission to develop new vaccines for diseases such as typhoid for use in developing countries. Ms. Lee is planning another charity concert in December to celebrate “raising 200 million won in donation.” She had been postponing the concert due to the COVID-19 situation.

“The habit of donating is a legacy that must be passed on to future generations,” she says, a mother who raises a daughter. “My father taught me that ‘donating all of the proceeds from your music performance is your way of showing respect to this world.’ Now that I’ve become a mother, I now believe that if I continue to show this habit, maybe my child and my students will follow. I have come this far in the hopes that we will all be united as  one through music.”