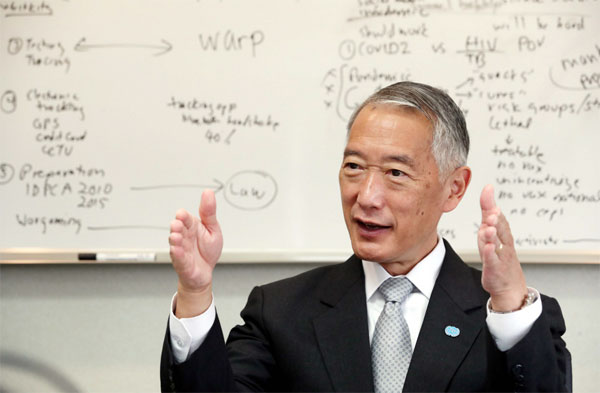 The Korean-language article can be found here:

An English translation of the article is below.

“Despite having enjoyed relatively more freedom than other countries, the recent resurgence of outbreaks has shown South Korea that it cannot afford to let its guard down.”

Jerome Kim, who has led the International Vaccine Institute (IVI) since 2015, said, “Until a vaccine is developed, outbreaks, big and small, will continue to occur. Even if a vaccine is found, it will take some time until it can be delivered. Until then, we should not let our guard down.” Further, “The Korean public seems to be shocked because church-originated COVID-19 cluster infections continue to occur, and  one church in particular is quite big in size, but in fact, outbreaks were predicted to occur anywhere – from churches to call centers to bars, etc.

“I don’t think Korea’s successful response to the first wave was solely a result of the government’s efforts,” Kim said. “The cooperation of the Korean public was key to success, and it will be required again this time.” Regarding the timeline for a COVID-19 vaccine, which is expected to be a game changer, he expects to see a vaccine with proven efficacy as early as November or December this year. Accordingly, tens of millions of doses could be produced and delivered to some parts of the public from early next year. Jerome Kim, Director General of IVI, which is the first international organization based in South Korea (Seoul National University), is a Korean-American expert on vaccine development and a world authority on AIDS research.

― Since last week, there has been a surge in COVID-19 cases

▷ The government should take a serious look at the resurgence of COVID-19. Korea was able to enjoy a more carefree summer than other countries. However, the recent resurgence of outbreaks has shown that we need to continue our efforts to contain the spread and that we need to remain vigilant until a vaccine is found. Until then, small-scale outbreaks will keep occurring. There can be no carelessness in dealing with infectious diseases.

It is only possible for life to regain some level of normalcy if both the government and the public stay vigilant. We have to assume that COVID-19 will continue to remain in the human body. This is different from SARS, which was transmitted when symptoms were present. But COVID-19 is capable of asymptomatic infection. Thus, it is difficult to identify spreaders as Korea has learned during the ‘Itaewon outbreak.’

― Many people are confused by the sudden resurgence of COVID-19

▷ There might have been problems with social distancing, proper mask-wearing, or people sitting close together at church to eat, but there is a slight difference to the big outbreak Korea experienced in March. At the time the virus was able to spread without any countermeasures in place as nobody knew what to do. This time, everyone is aware of the virus and that the resurgence of outbreaks should be prevented, and that the government has to identify, track, and monitor the virus to contain the spread.

Other countries that had a similar approach also faired well in dealing with the virus. Until a vaccine comes out, the government has no other options. The government’s role is to control the spread and to communicate with the public to encourage participation in control efforts and seek their understanding. The public should not let their guard down. Cooperation is everyone’s business if we want to gain back the level of freedom and economic activity that we enjoyed before the pandemic.

▷ I think September is a little too soon. It will not be until November or December this year that we can expect a vaccine that has been proven effective. Currently, many pharmaceutical companies worldwide, including Moderna and Pfizer, are working on a vaccine. By the end of this year, we may have several vaccines available, and in fact, the more different vaccines we have, the better it will be. Since COVID-19 affects the whole world, we need more vaccines than any single pharmaceutical company could possibly produce.

― When to expect COVID-19 vaccinations

▷ The journey of a vaccine consists of three stages: testing, production, and distribution. Generally, it takes five to ten years for a vaccine to be developed and administered to the general public. As COVID-19 has become a pressing issue around the world, the timeline for a COVID-19 vaccine will be considerably shorter. We expect a vaccine to arrive in 12 to 18 months as activities are conducted at high speed with many necessary steps overlapping while being executed.

While not in accordance with the usual vaccine development process, it is one way to significantly reduce development time.

The plan is to start production before a vaccine candidate has been proven effective. Vaccine production will begin in Q4, and tens of millions of doses are expected to be available early next year. CEPI, in which the Korean government is also participating, is moving to secure two billion doses by the end of next year. Starting next year, older people, who are more vulnerable to COVID-19, will likely be first in line to receive vaccines.

―The U.S. and other rich nations are scrambling to pre-purchase vaccines

▷ Therefore, it is important for Korea to join the efforts of CEPI. The Johnson & Johnson vaccine was signed by CEPI months ago, and CEPI has also entered contracts with the Oxford Vaccine Group, Inovio, Moderna, etc.

These contracts contain a clause guaranteeing ‘global access’ at ‘affordable cost.’ Accordingly, CEPI will provide vaccines to the COVAX facility which GAVI, the WHO, and CEPI are part of, and which will help COVAX to secure two billion doses in total.

In order to lower prices, South Korea also needs to think about joint vaccine purchases with other countries. In fact, there are cases in which four European countries joined forces to purchase vaccines together. In the case of the U.S., which has a population of over 300 million, it is clear that they will buy a large amount, which gives them better bargaining power.

― I don’t think we need to worry about securing the vaccine if we produce it ourselves. What is

‘vaccine sovereignty’ about and what is the status of vaccine development in Korea?

SK Bioscience also signed with U.S. manufacturers NovaVax and AstraZeneca to contract manufacture vaccines for them.

The Indian government is also believed to have entered into similar contracts to receive part of the production output. If the AstraZeneca or NovaVax vaccine works, and I think Korea will also receive a part of the output.

― What if the virus mutates and makes the vaccine useless.

▷ It depends on how much the virus mutates. So far, more than 40,000 COVID-19 viruses have been analyzed. Of course, there are mutations. But if we were to liken the mutation rate of COVID-19 to the size of a pen point, the mutation rate of the influenza virus would be the size of a finger. The human immunodeficiency virus (HIV) then, which mutates every year, would be about the size of an orange. In comparison, COVID-19 mutations are relatively small. In Europe and North America, only six of the 30,000 RNA “letters” mutated.

The vaccine that is being developed now is expected to protect us from COVID-19 strains in circulation for the next few years.

― It is said that flu epidemics in the winter amid the pandemic could potentially be disastrous.

▷ Make sure you get a flu vaccine to avoid confusion with COVID-19. It is difficult to respond to both the flu and COVID-19 at the same time. On a more positive note, people started to take masks, personal hygiene, and proper social distancing more seriously, so there have been fewer flu cases recently.

― Do you have any personal relationship to LG Chairman Koo Kwang-mo, who recently donated 1 billion won to the International Vaccine Institute?

▷ No, not at all. It was a personal donation of him and not from LG. I had heard before that he was interested in donating. It would be nice to meet in person to express our gratitude. The donation will be used to support the search for a COVID-19 vaccine.

― There is a lot of interest in “Korea’s response to COVID-19.” What is behind Korea’s success story?

▷ With the help of its advanced biotechnology companies, the Korean government was able to mass-produce diagnostic kits quickly and to prevent further infections effectively through rapid isolation of confirmed cases.

Due to its experience with MERS, the government also knew how to communicate effectively. The prime minister was sent to head the Central Disaster and Safety Countermeasure Headquarter and Jeong Eun-kyung, Director ofthe Centers for Disease Control and Prevention to the team, making responsibilities clear. The government made full use of its powers.

Asia Times | Vaccinations in a race against viral variants