April 25, 2022 – SEOUL, Republic of Korea – The International Vaccine Institute (IVI) hosted the 2022 Award Ceremony of the IVI-SK bioscience Park MahnHoon Award today, honoring Dr. Tore Godal, special advisor of global health to the Norwegian Ministry of Health and Care Services and advisor to the Coalition for Pandemic Preparedness Innovation (CEPI), and Professors Drew Weissman and Katalin Karikó of the University of Pennsylvania as co-recipients.

In attendance at the first award ceremony at IVI headquarters in Seoul were Dr. Tore Godal, former UN Secretary-General Ban Ki-moon, IVI Director General Dr. Jerome Kim, SK bioscience CTO Hun Kim, H.E. Frode Solberg, Ambassador of Norway to the Republic of Korea, and Ambassador of Hungary to Korea. Mr. George Bickerstaff, Chair of the IVI Board of Trustees, congratulated the awardees in a video speech, while Profs. Weissman and Karikó also joined the ceremony virtually by sending pre-recorded video messages. The ceremony was followed by the Award Forum, which featured lectures from the three awardees on their work and achievements.

“The guiding spirit of the IVI Award is to recognize pioneering efforts to advance the research, development, and delivery of vaccines for global health. We have recently witnessed the incredible power of innovation through the development of novel COVID-19 vaccines at record speed.” Mr. Ban Ki-moon said in his congratulatory speech. “I offer my highest congratulations to you all for this honor; as well as for your monumental achievements in this critical field. You are the champions of innovation in global immunization and the sciences of vaccines. You have made an oversized difference to global public health in saving and improving countless lives.”

Dr. Godal served as founding CEO of Gavi, the Vaccine Alliance from 1999-2004, leading the founding of the alliance, which enabled low-income countries to vaccinate 888 million children from 2000 to 2020. WHO and UNICEF ​​estimate that Gavi has helped save more than 15 million lives. He is currently serving as an advisor to CEPI, which he helped create, continuing his endeavors to accelerate the development and delivery of vaccines.

“I am truly honored and humbled to receive the first IVI-SK bioscience Park MahnHoon Award,” Dr. Godal said. “IVI is one of the great innovations in global health and Dr. Park MahnHoon was an innovator who has contributed to making South Korea with SK bioscience one of the leading countries in vaccine development and manufacturing that is so much needed in this pandemic-prone world.”

Prof. Drew Weissman, a physician and researcher at the University of Pennsylvania Perelman School of Medicine, has been cited for his contributions to RNA biology and the COVID-19 vaccines. He and his colleague Prof. Katalin Karikó jointly invented the modified mRNA technology being used in vaccines from Pfizer-BioNTech and Moderna to prevent COVID-19.  Profs. Weissman and Karikó, a biochemist and Senior Vice President at BioNTech and an adjunct professor of Neurosurgery at the University of Pennsylvania, discovered a way to modify mRNA and then developed a delivery technique to package the mRNA in fat droplets (called lipid nanoparticles), which makes it possible for mRNA to trigger the body’s immune system to fight disease. This innovation made mRNA safe, effective, and practical for use, establishing a foundation for the two SARS-CoV-2 vaccines that have led the world’s fight against the pandemic virus.

“I wish to thank the organizers for awarding the prestigious award to Prof. Katalin Karikó and myself. This is the first IVI-SK bioscience Park MahnHoon Award and I hope we set good examples,” Prof. Drew Weissman said. “I also hope that we can help mRNA vaccines develop more in various fields including gene therapy for cancer, other than coronavirus vaccines.”

“I am thrilled and deeply honored to become the first recipient of the IVI-SK bioscience Park MahnHoon Award. The success of the mRNA vaccine technology demonstrates the power of innovation and the importance of persistence,” Prof. Karikó said. As a scientist, I focused my entire career on developing mRNA for therapy. I am incredibly pleased that the technology that I helped make possible is today saving millions of lives and has even more applications for the future.”

“IVI is privileged to acknowledge and congratulate the three awardees who have made extraordinary contributions to global immunization and vaccine development,” said Dr. Jerome Kim, Director General of IVI and Chair of the Award Selection Committee. “Commemorating the 25th anniversary this year as the world’s only international organization devoted to the development of vaccines for global health, IVI will continue to identify and recognize vaccine pioneers and innovators to promote the science of vaccine and global health, building upon the legacy of the late Dr. Park MahnHoon in collaboration with SK bioscience.”

SK bioscience CTO Hun Kim said, “I express my profound gratitude to those who devoted their lives to guarding global public health. As a researcher who spent more time with Dr. Park than any others, I will try to ensure his vision, passion and enthusiasm will pass on to younger colleagues to bear fruition.”

The IVI-SK bioscience Park MahnHoon Award annually honors up to two international individuals and organizations that made extraordinary contributions to the discovery, development and delivery of vaccines and advancement of global health. The award was launched to commemorate the legacy of the late Vice Chairman Dr. Park MahnHoon of SK bioscience. SK bioscience contributes funding for two 100 million Korean won (approx. $85,000 USD) annual prizes to IVI for the awards.

The International Vaccine Institute (IVI) is a nonprofit inter-governmental organization established in 1997 at the initiative of the United Nations Development Programme (UNDP). IVI has 38 countries and the World Health Organization (WHO) on its treaty, including the Republic of Korea, Sweden, India, and Finland as state funders.

Dr. Park MahnHoon (1957-2021) is a pioneer of cell culture-based vaccines in South Korea who made important contributions to vaccines for global health. Dr. Park is credited for elevating South Korea’s vaccine R&D capabilities up to global standard while leading the company’s vaccine projects, including the joint development of an innovative pneumococcal conjugate vaccine (PCV) with SANOFI-Pasteur, and the development of a novel typhoid conjugate vaccine in collaboration with the International Vaccine Institute (IVI) with support from the Bill & Melinda Gates Foundation When licensed, these vaccines are expected to make significant impact in improving the health of people around the world including in low- and middle-income countries. As a visionary of the vaccine industry, Dr. Park played a pivotal role in the development and commercialization of the world’s first cell culture-based influenza vaccine (2015), and the development of a pneumococcal vaccine (2016) and the world’s second shingles vaccine (2017). Core technologies for SK bioscience’s own COVID-19 vaccine candidate, GBP510 and CMO production of COVID-19 vaccines developed by global biopharmaceutical companies in response to the COVID-19 pandemic largely derive from the cell culture-based vaccine technology established by Dr. Park. 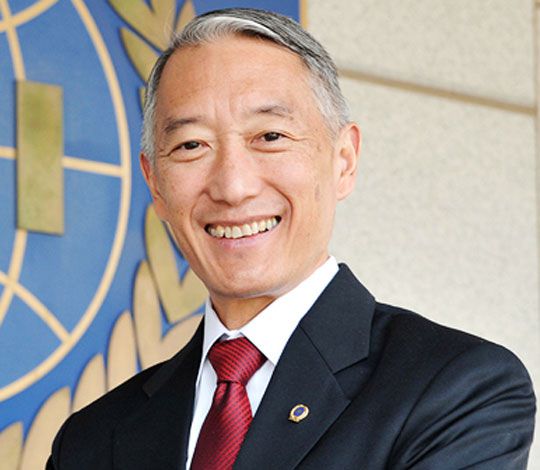