IVI in the Media

IVI in the Media

Asia Times | Vaccinations in a race against viral variants

Nature | Why COVID vaccines are so difficult to compare

DEVEX | Opinion: COVAX — too big, and too important, to fail

CNN | “Our response needs to be clear, strong, and unified”

South China Morning Post | Coronavirus vaccines will save 2021? Not so fast, here’s what the experts think

Bloomberg | Will the Covid-19 Vaccines Be Effective and Safe?

The Telegraph | ‘If you are not prepared, the virus has found every weakness’: How countries in Asia tamed Covid-19

CGTN | ‘The vaccine itself is not the silver bullet,’ says International Vaccine Institute

Devex | Q&A: Why Jerome Kim is ‘hopeful’ but cautious about distributing a COVID-19 vaccine

Channel News Asia | On a fast track like never before: The COVID-19 vaccine effort and 5 vital questions

The Economist’s Future of Healthcare Insight Hour | Vaccine development: A race to the finish line

Devex | Q&A: Is COVID-19 helping or hindering progress toward an HIV vaccine?

TED | The trials, tribulations and timeline of a COVID-19 vaccine

CGTN: The Agenda with Stephen Cole | Speed of vaccine trials is ‘unprecedented’

Seeker | How Fast Can We Make a Coronavirus Vaccine?

Wion News | About 70% of vaccines used around the world are made in India: S Korean expert Dr Jerome Kim

South China Morning Post | How long will a coronavirus vaccine take? A Q&A with Jerome Kim, head of the International Vaccine Institute

BBC World News | Jerome Kim: Vaccines are the long-term solution to the pandemic

RTE | What South Korea can teach Ireland about fighting Covid-19

By then, we’ll have a vaccine on our side (Hankyoreh—Korean)

Coronavirus Pandemic: International Vaccine Institute director on how long it will take to develop vaccine (CGTN)

How close are we to a COVID-19 vaccine? Jerome H. Kim from International Vaccine Institute (Arirang News)

Inside the race to find a coronavirus vaccine (Devex)

Concerns about the spread of COVID-19: When will a vaccine be developed? When can we expect the “Super Vaccine”?

When will COVID-19 vaccine be commercialized…And “super vaccine”? (Korean)

One of the things that never ceases to amaze me about Seoul is how seriously it takes its role as a “global city.”  My colleagues who have lived in Seoul before tell me that this was not always the case.  However, nowadays, whether I’m attending a professional baseball game featuring foreign players or enjoying a Belgian beer or Thai cuisine, it’s pretty clear that the whole world has come to Seoul.  Food and sports aside, nowhere is this more apparent than in the sheer number of international organizations and global conferences hosted in the Seoul Metropolitan area.  During my time here, I’ve had the chance to visit several, including the International Vaccine Institute, the new United Nations human rights field office, the Green Climate Fund, and the World Bank regional office.
In 2003, the International Vaccine Institute (IVI) opened its new headquarters in Seoul.  Established with the lofty goal of reducing the spread of some of the world’s most dangerous infectious diseases, the good works of the IVI have saved countless lives and protected some of the world’s most vulnerable people from illness.  The Republic of Korea not only hosts the organization in Seoul but has also been one of its biggest and most generous contributors, contributing 30% of their operating budget.

Recently I had the privilege of meeting Dr. Jerome Kim, the IVI’s newest Director General, at his inauguration ceremony.  Dr. Kim is not only one of the world’s most accomplished medical researchers. He also has a distinguished military career, serving in both the U.S. Army Medical Corps and U.S. Air Force.  Dr. Kim is truly one of our most accomplished Americans of Korean descent.  His appointment represents yet another success for the Korean-American community. 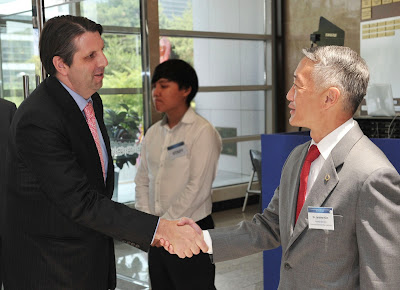 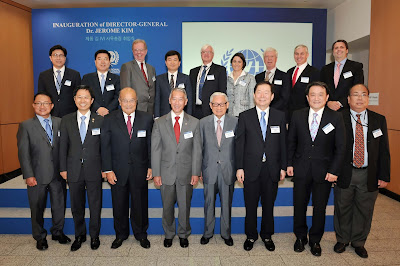 At the International Vaccine Institute (IVI)
On June 23rd, I attended the opening in Seoul of the newest United Nations human rights field office.  For this event, the UN High Commissioner for Human Rights, H.E. Zeid Ra’ad Al Hussein, made his very first visit to Asia as High Commissioner.  Along with South Korean Foreign Minister Yun Byung-se, High Commissioner Al Hussein delivered opening remarks, pointing out the Republic of Korea’s increasing leadership on human rights on the international stage.   The office was formed to comply with recommendations made by the United Nations Human Rights Council (UNHRC) and the Commission of Inquiry (COI) on Human Rights in the Democratic People’s Republic of Korea.  The presence of the office in Seoul will bolster international efforts to publicize human rights violations against North Korea’s 25 million citizens.  As many are aware, those who suffer the most under the DPRK regime are the DPRK people themselves. 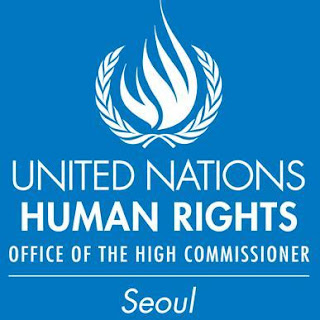 Nearby, Songdo is perhaps most famous for its successful efforts in attracting international universities to establish campuses here in Korea.  But Songdo is also the host of the Green Climate Fund, showcasing the Republic of Korea’s leadership on environmental issues, particularly the mitigation of climate change.  The Fund is doing innovative, creative, and groundbreaking work to ensure the protection of Mother Earth.  For more on Secretary Kerry’s views on climate change, see here!

Moreover, Songdo houses the World Bank Regional Office established in December 2013.   As you know, the World Bank is represented by another successful Korean-American leader, Jim Yong Kim.  I had a chance to visit these two wonderful sites in late April to witness this global presence in Songdo. 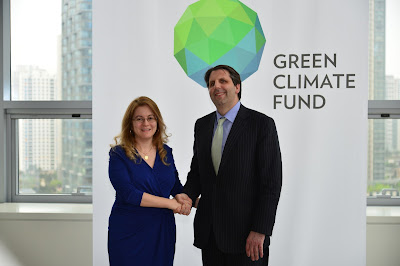 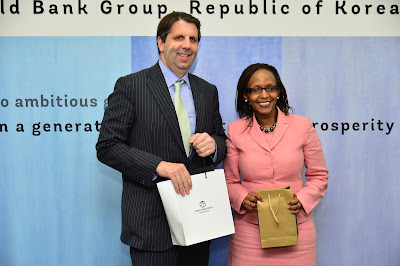 At Green Climate Fund and World Bank Regional Office in Songdo, Incheon
These are just a few examples of how Korea is not just a country with a dynamic national culture; in recent years it has emerged as a global capital with the skills and reach to solve international problems. Whereas the U.S.-Korea relationship was previously founded on our military alliance, we now work together as equal partners on some of the most important issues facing our world today.  As the U.S. Ambassador to the Republic of Korea, I am proud to work with South Korean officials on these and other issues as we strive to make the world a better place together.