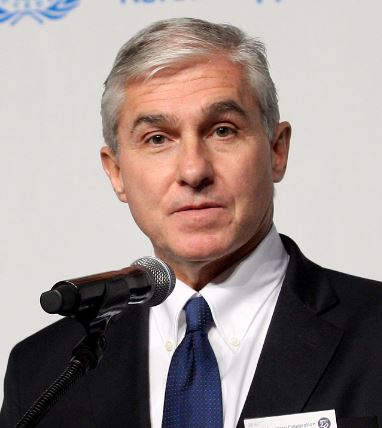 Mr. Bickerstaff is a leader in business and philanthropy, with over 35 years of experience in healthcare and finance. He is currently Managing Director of M.M. Dillon & Co., a private investment bank which he co-founded, and previously held the position of Chief Financial Officer of Novartis Pharma AG. He has also worked at Dun & Bradstreet and General Electric.

Mr. Bickerstaff has served as a member of the board of multiple public, private and global foundations, including Gavi, the Vaccine Alliance. His philanthropic interests have focused on healthcare and child protection, serving on the board of non-profits including International Center for Missing Children and Global Oncology. He is based in New York and holds degrees in business and engineering from Rutgers University.

Commenting on his appointment, Mr. Bickerstaff said “It is a great privilege to assume the chairmanship of the Board of Trustees of IVI, an institution with a noble mission for humanity that I have had the pleasure to serve for many years. I look forward to working with the IVI team, donors and partners to help ensure that the institute can make a greater impact in global health and vaccines.”

Dr. Nohynek, the new Vice-Chair, is currently Chief Medical Officer and Deputy Head of Infectious Diseases Control and Vaccines Unit at the National Institute for Health and Welfare in Finland. A practicing physician and vaccinologist, Dr. Nohynek has served on expert committees evaluating the introduction of pneumococcal conjugate vaccines (PCV) and rotavirus vaccine in Finland, and as a technical advisor to the European Union, IVI, the World Health Organization, Gavi, the Finnish Ministry of Foreign Affairs, and several vaccine manufacturers.

IVI Director General, Dr. Jerome Kim said, “IVI is very pleased to welcome Mr. George Bickerstaff, Chair and Dr. Hanna Nohynek, Vice-Chair, in their new appointments. I am sure they will continue to bring a wealth of expertise and experience to the leadership of the board. Under their guidance, IVI will fulfill its commitment to accelerate vaccine research and development to give vulnerable people everywhere the opportunity to lead healthy and productive lives.”

The International Vaccine Institute (IVI) is the world’s only international organization devoted exclusively to developing and introducing new and improved vaccines to protect the world’s poorest people, especially children in developing countries. Established in 1997, IVI operates as an independent international organization under a treaty signed by 35 countries and the World Health Organization. The Institute conducts research in more than 30 countries of Asia, Africa and Latin America on vaccines against enteric and diarrheal infections, Japanese encephalitis, MERS-CoV, and dengue fever, and develops new and improved vaccines at its headquarters in Seoul, Republic of Korea. For more information, please visit www.ivi.int